Day 46! This means it’s the end of my first full month of posting (as in, where I have posted every day from the first of the month through until now)… it might be a slightly made up milestone, but I’ll take it!

[This was from my second attempt with the R72 infrared filter, this time on the D700. From what I’ve read and been told, you apparently can’t do IR with that camera – the hot filter is supposedly too effective. Well, I guess someone forgot to tell my D700 that! Had to borrow Sharon’s little 50mm f/1.8D lens, which is also apparently suitable for IR as it doesn’t generate a hot spot in the frame. Well, I still had one, but only a little one. Who knows? Could be the camera?

Actually, truth be told, I’m not sure what we’re seeing here really is strictly IR – or more accurately, near-IR… you see, my filter also lets through some visible red light, and I suspect that’s what came out in this exposure. I’m quite happy with the end result though – what do you think?] 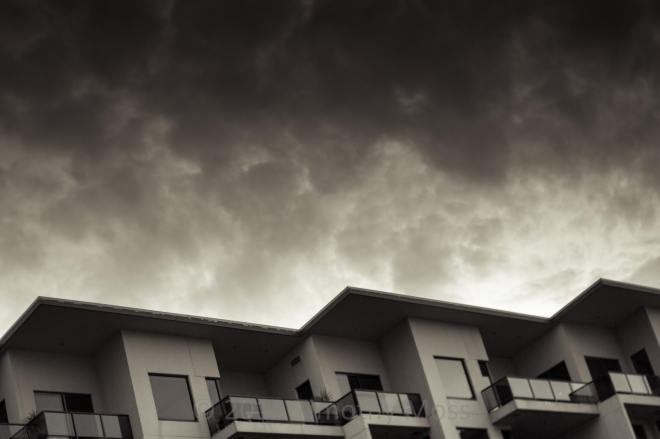 Day 45. A similar shot in some ways to yesterday, although this is a new building for you. It’s actually very close to the location of Day 15, but really quite different obviously!

[Very interesting weather conditions this afternoon – an eery sea mist rolled in as we drove back into Burnie, shrouding the view. Despite the mist, the sun still burnt through, so there were bright patches of sunlight on the water, diffused by the fog… of course, I have no shots of all that! I have this instead. D700, Lensbaby, Edge 80. Works quite well for more architectural work, if you ask me!] 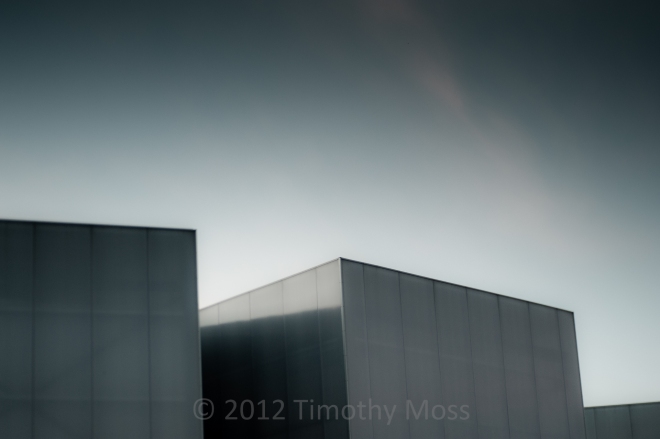 [This is the same building that appeared – briefly – as part of the Day 40 shot. Obviously a very different angle and processing, although it was actually the same camera and lens combo – D700 and the Lensbaby Edge 80. Just before I took this, I was walking along the boardwalk near the beach in Burnie, watching the full moon rise and listening to the haunting sounds of the bagpipes from the nearby Pipe Band practise building. A strange set of events, but I liked it. A lot.] 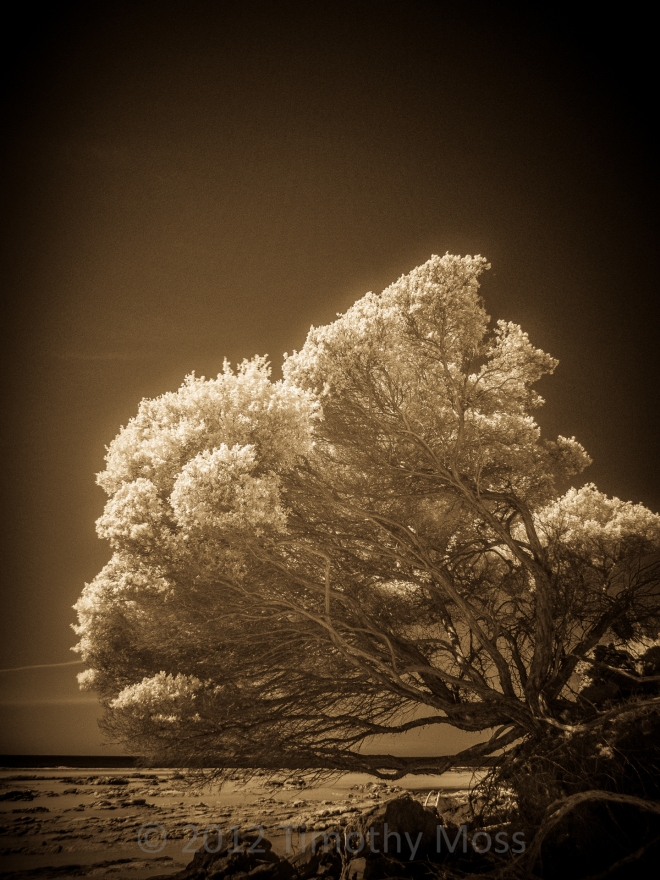 Day 43. Experimenting today with a new piece of equipment – an R72 IR filter. These block all (or at least most) visible light and allow only Infrared light to pass through. The catch is though that most DSLRs have an IR-cut filter in front of the image sensor to reduce IR… so you end up with (very) long exposures in the middle of the day. I’ve never ever in all my time as a photographer ever shot IR before. Lots to learn.

[Here are three things I learnt today: 1) IR is completely different to visible light. Things that I thought would be bright, weren’t. Other things were brighter. It’s like seeing in a completely different way. 2) Both of the lenses I tried today have IR ‘hotspots’, meaning circles in the centre of the frame that go a really long way towards ruining the shot, and are almost impossible to get out in post-processing. Advice from those more knowledgeable than me = try another lens. Hmm… 3) IR is challenging, new, and fun! Oh, and one more thing: 4) False colours are also fun, but probably have a limit and a bit of gimmick value… Not to say that you won’t see any here in the future though!

Still lots more to learn, and this shot is probably less ‘mature’ in terms of technique and end-point quality in my eyes than I would usually post, but perhaps we can see this as a baseline, to refer to over time. Oh, and this was shot with the OM-D (Don’t even think about IR with a D700!), and the Panasonic 14mm f/2.5 pancake. The other lens that I tried that had an even worse hotspot was the Panasonic Leica 25mm f/1.4. So it will be back to the drawing board to try my other lenses next I think! Also, I went for a Kenko R72 filter – same glass as the Hoya ones. Made in Japan. Just in case you are interested.]

Day 42. It’s been a while since we had a flower shot, so here’s some lavender for you. I hate spelling that word!

[Lensbaby, D700, Soft focus optic and macro extender. I find this a really tricky combo to work with – more practise is definitely required!!] 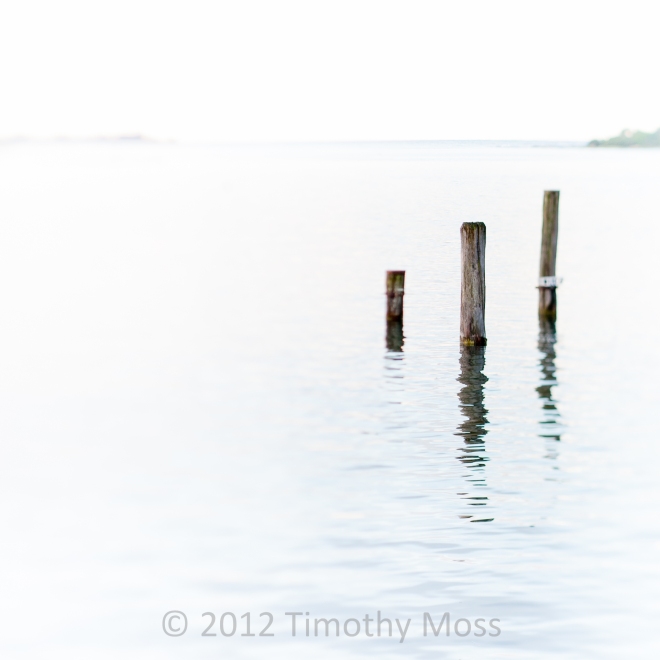 [Ulverstone – the Leven River.  Almost the same location as Day 12, now that I think about it… Shot with the Lensbaby and Edge 80 combo.] 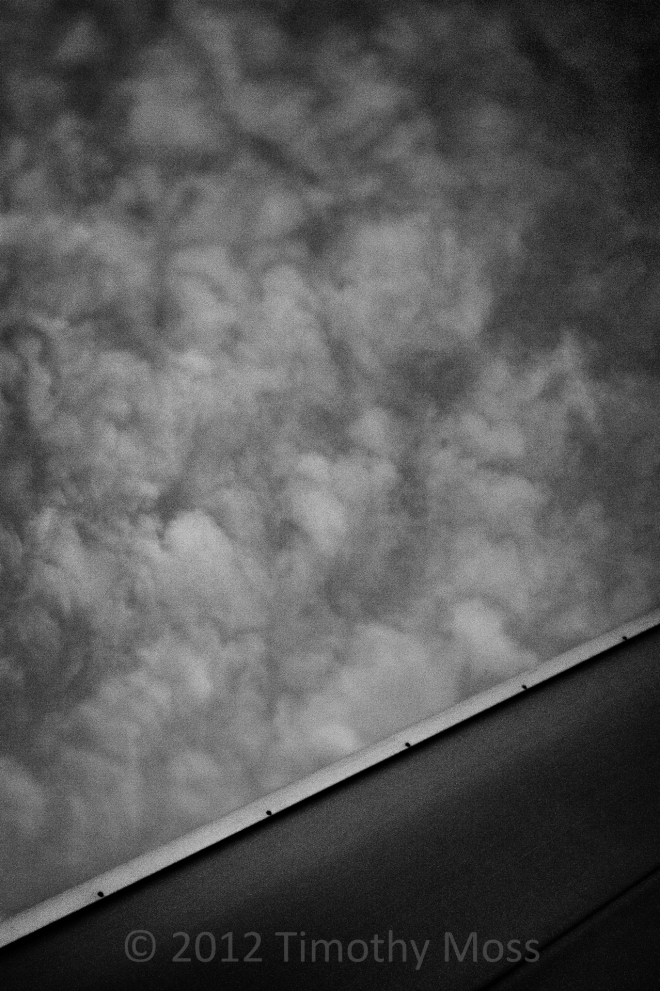 [This is actually exactly the same spot as Day 33, but looking up instead of across.  It was almost completely dark – the clouds are lit in the reflected orange glow of the nearby street lights.  Not that you can really tell in black and white! Taken with the Nikon D700 at some ridiculous ISO (it really was dark), and the Lensbaby + Edge 80. Processed to bring out the textures and add some more grainy goodness in Silver Efex Pro 2.] 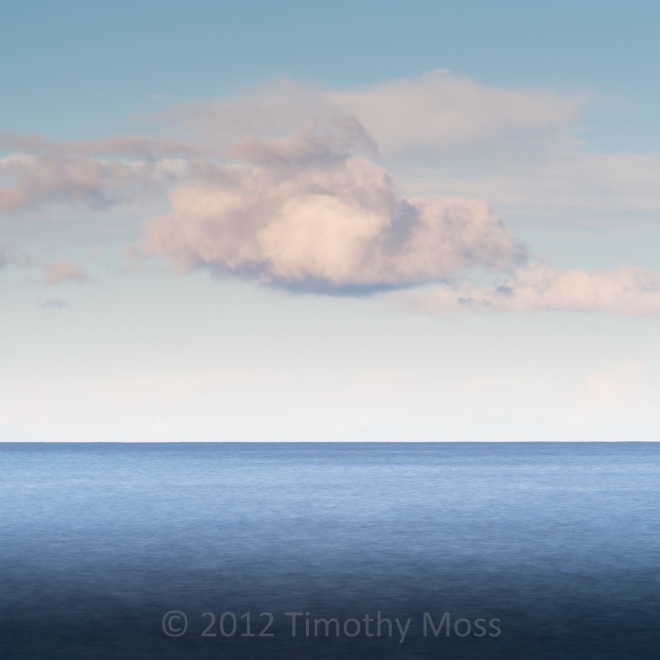 Day 39… Well, we haven’t had a seascape for a few days now, or a shot of Doctors Rocks, so here is they, together again. Like a reunion of sorts. Except being away for only three days probably doesn’t warrant a reunion. Never mind – I’m rambling. And while I’m on that, is this really a seascape? Or more of a cloudscape? You can thank Dean for my decision to turn the camera upwards just a little more…

[Taken with the OM-D and the Nikon-mount Samyang 85mm f/1.4. I just liked that cloud… seemed so self-contained and complete.]

[I was on my way back from a more focused (but unsatisfying) shoot, when I drove past this apple orchard. And then stopped and went back. The only possible place to take the photo I wanted was right in the middle of the road. So here it is. I saw this in black and white even before I decided to take the photo… Taken with the Nikon D700, along with the Lensbaby. Edge 80 again, of course. Oh, and Silver Efex Pro 2 again too. Of course.]

Day 37. Just an ordinary flower. Just around the corner from my house. Just.

[Taken with the D700 and the Lensbaby Soft Focus optic. Love this optic, but I find the effect and the bokeh a little hard to predict still. I think I just need more practise. It kind of work in this one though, or at least I kind of like it.]