This was my third version of this image. I knew I liked the image from the very start – something about the pose of the guy in the background (not to mention his colourful shirt!) – he seemed relaxed, comfortable, and very much in his element. I liked the sightline that led me from his eyes to the eyes of the other guy to the right, who seems more directed, more ‘busy’, moving through the scene without pausing. I liked the contrast that created.

I write that this is the third version. In the first, I hadn’t cropped at all – there was more space at the top of the frame. But I set the image aside, and when I came back, I realised that there was a light grey awning (or something) at the very top left, that just drew my eye out of the frame.

Then there was version 2. There was actually two other people next to our man in blue – no, I didn’t ‘doctor’ the image or clone them out; I simply cropped it to exclude them. I did this only after actually uploading that version to WordPress. Seeing it small on the screen as part of this post really helped me to see that they didn’t need to be in the shot, and in fact they distracted from that core at the centre of the frame. So, a quick crop, and a new upload later, and here we are.

Technically, it’s not a great shot. At all. It’s blurry, grainy, and I just couldn’t find any way of resolving the visual ‘interference’ that the different signs cause at the top of the frame (and now you won’t be able to ‘unsee’ that!). But I like it anyway. And maybe there’s more to an image than technical perfection and a tidy frame – or not… 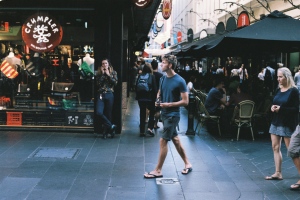 …small changes, but I think they add up!)

This site uses Akismet to reduce spam. Learn how your comment data is processed.