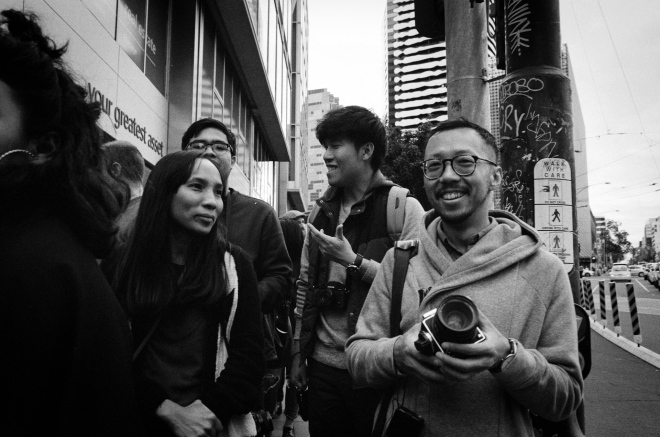 Why I shoot film: A reflection on photography (part 4).

My third reason for shooting film is something of a surprise to me, but when I started thinking about my sequence of points here, there was no doubt I needed to include it. The third reason is community.

My reintroduction to the world of film photography came one weekend afternoon, when Sharon and I were out photographing in the city. Sharon was taking photos of strangers (with their permission I hasten to add!) outside the State Library, and I was milling about taking moody photos of pigeons or something. Then an enthusiastic guy (his name was Gary, he was quick to tell me) came over and asked if I would mind taking a photo of his group of photographers. They all shot film, and were out on a photo walk together. I took the shot (in fact several shots, on film cameras of various vintage), handed Gary his camera, and started to go on my way. In thanking me, Gary told me he ran a cafe and film camera store, and that I should drop in some time for a coffee.

The idea, much like the coffee, spent some time percolating. Realising that it was actually still possible to buy film, and film cameras, got me to thinking. A couple of weeks later I did drop by for that coffee. I left with a Polaroid SX70 Alpha 1, and the rest is history (or at least a series of packfilm and 35mm frames). The thing that surprised me about Gary’s shop was the fact that it didn’t really feel like a shop at all – it was more like a place where people would spend some time drinking coffee and discussing photography. It wasn’t pretentious at all; nor was it populated by snobby artists who would turn their nose up at me in my usual business work attire. It was a group of genuinely nice people instead. Imagine my surprise.

Some time after that, Sharon and I went on one of the monthly photo walks that Gary organises. It was a lovely warm afternoon, and as we wandered through the Botanic Gardens we chatted with a couple of lovely warm people. Since then I’ve been on three or four other walks, and this same atmosphere has existed at every one. Maybe they were a nice group of people before they started shooting film, or maybe shooting film made them nice people – in either case, I’ve greatly enjoyed spending an afternoon each month exploring the city and taking photos. It gives me a reason to shoot, and it also gives me subject matter; many of the shots I’ve shared of people here and on Instagram have come from these photo walks (including today’s image). Oddly, I feel a similar community (albeit considerably larger) exists online amongst film photographers – The Polavoid, for instance, is dedicated to sharing wonderfully evocative Polaroid shots, and the Film Shooters Collective is a vibrant and engaged community sharing film images of all kinds.

So, being part of a community of like-minded photographers (both in person and online) has been a surprising, and suprisingly important, aspect of my film journey.

This site uses Akismet to reduce spam. Learn how your comment data is processed.